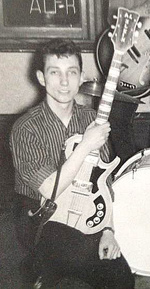 Bought by the 18 year-old Alan Klein of the 'Al Kline Five' (sic) "as a prototype - because you'd never seen anything like it and *just had to have it* - at the end of 1958"'. Note the 'Al Klein' lettering on headstock. Al went on to record two singles with Joe Meek in 1961

Only currently-known example, Possibly the same instrument with 'Al Klein' removed, and changed tailpiece, or is perhaps a second prototype:

Differs from advertised model and design notes in having no vibrato unit, and a two-part pickguard, with the secondary plate lost.

Dating from approx. early Dec '58, this is the oldest known surviving Burns guitar (apart from the Supersounds)! Built with Besson pick-ups and Besson-supplied bridge and tailpiece, this hollow body featured a plastic back (like the Burns Weill Super Streamline RP1Gs).

I wonder what the sticker on the back of the headstock used to say? 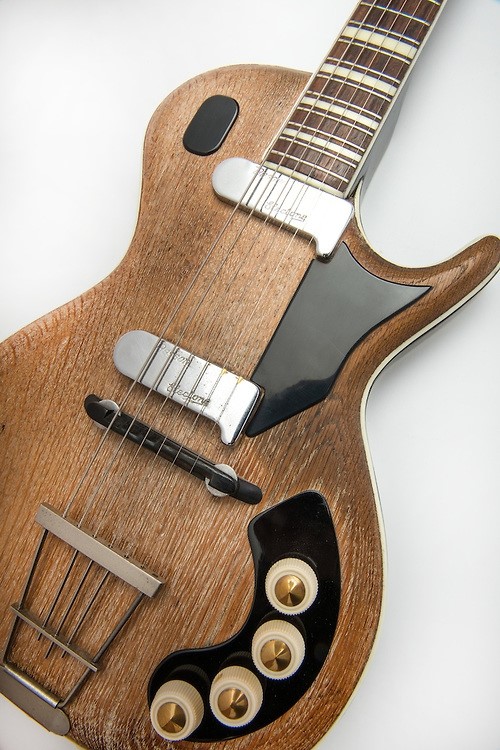 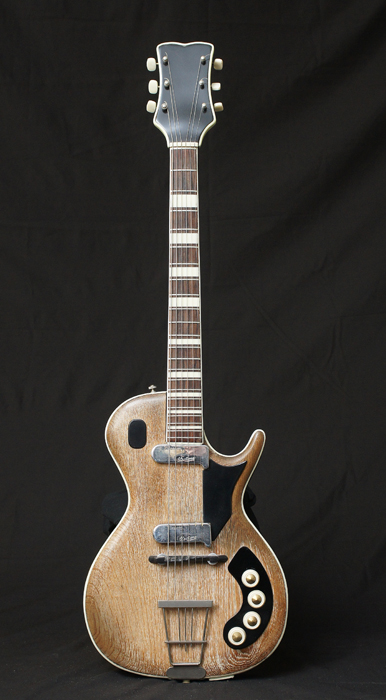 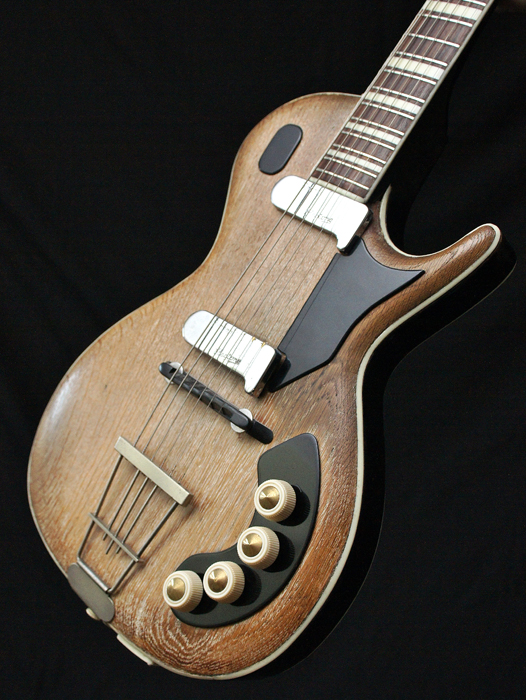 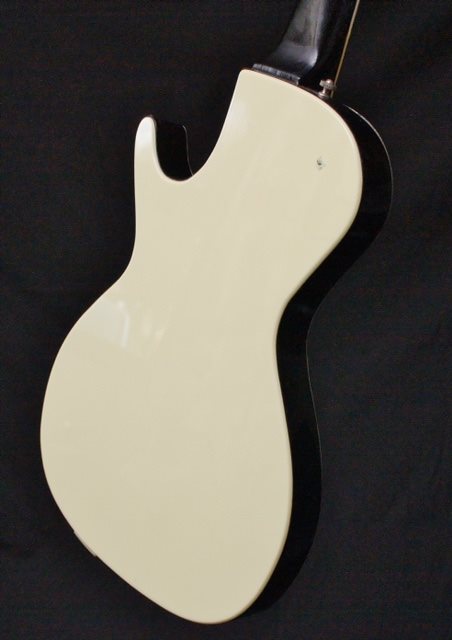 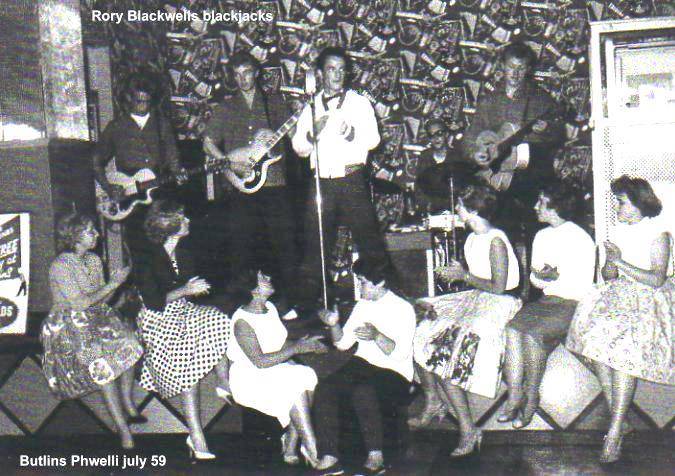 Rory Blackwell & The Blackjacks are credited with being Britain's first Rock 'n Roll band, and appear in the 1957 feature film 'Rock You Sinners' 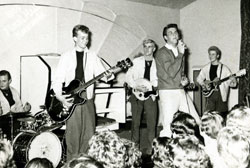 Vince Eager circa 1959, backed by Colin Green (far right) on Burns Weill guitar featuring a full-size pickguard covering most of the body front, and a pale headstock. The rhythm section is a pre-Johnny Kidd & The Pirates Clem Cattini on drums, Brian Gregg on bass.

I wonder if the impressive guitar runs on this 1959 flipside, an audacious cover of Marty Robbins' El Paso, were done by Colin on a Burns Weill?!?

with large pickguard, dot markers, hard tailpiece, and (looks like a) Burns-Weill badge on headstock.

I am not sure who the band are!

It certainly is an early example and could be viewed as the 'missing link' between the similarly-shaped, Ike Isaacs-derived Burns-Weill and the Burns-Weill range proper, introduced around May 1959. Henry Weill's involvement is confirmed by the scratchplate, but the pickups (presumably original) are actually Besson-branded units intended for acoustic guitar use, rather than Weill-made single-coils. Coincidentally, Besson were the first to advertise the Burns-Weill line at that time, including an earlier mention of a 'short-scale solid' at £35 - possibly this model? That's £16 cheaper than the presumably preceding Ike Isaacs style Burns-Weill, which in turn was £15 less than the ill-fated Supersound original. 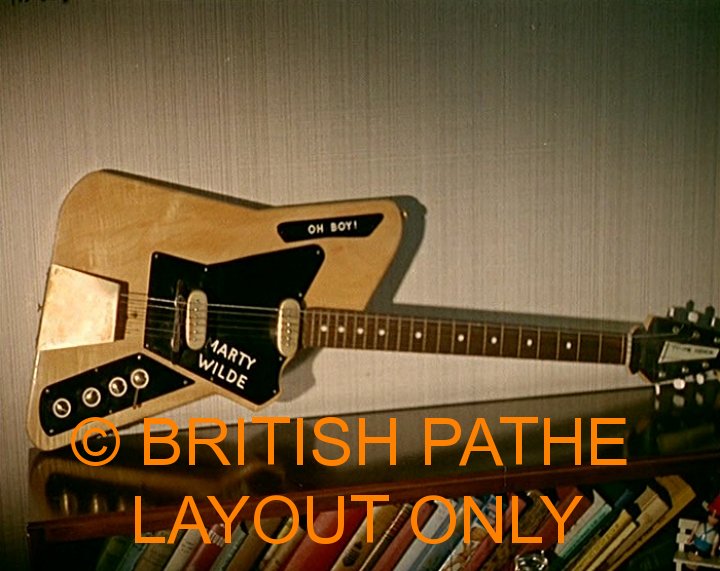 An early prototype, presumably presented for use on Oh Boy! TV show, which ended May 1959.

Two-piece guard with no secondary pickguard, predecessor of the Flyte/Mirage design 14 years later!?

Where was the wiring passing through? Rectangular jack plate seems unique, to hide wider aperture for drill access to pickup routs? 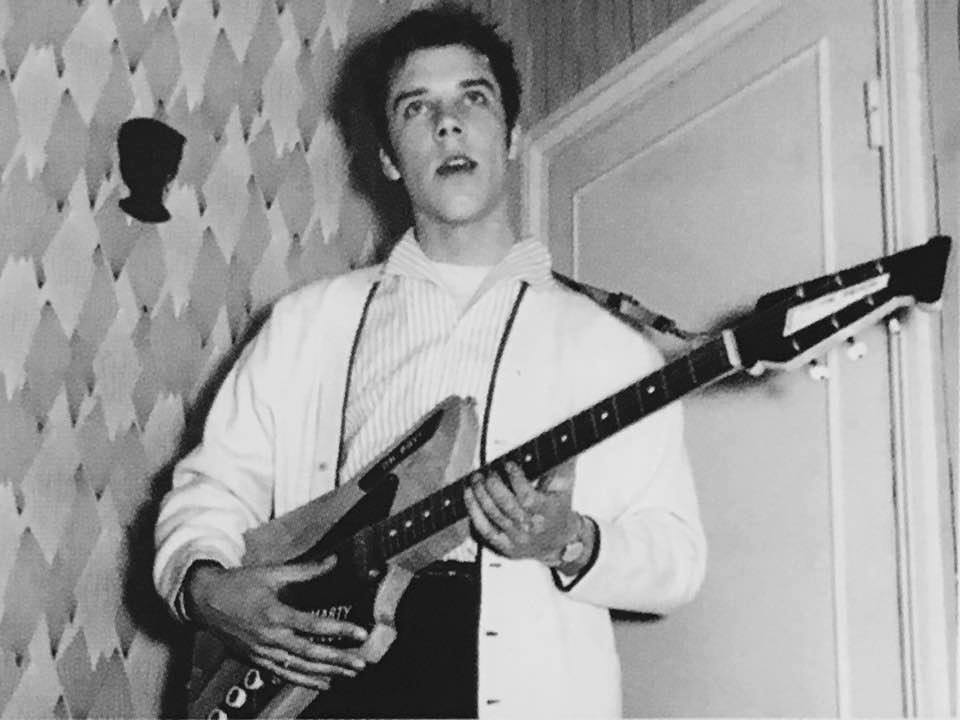 My guess is that Marty Wilde’s Oh Boy special was one of Jim’s first angular design electrics, as the body styling and scratchplate are significantly different to those that soon followed. Jet Harris is pictured with a very similar four-string equivalent and both examples employ rosewood fingerboards, as do other very early Burns-Weills, with only a single or double dots at the 12th fret, preceding the more common sycamore alternative that sported Jim’s soon-to-be trademark triple dots. 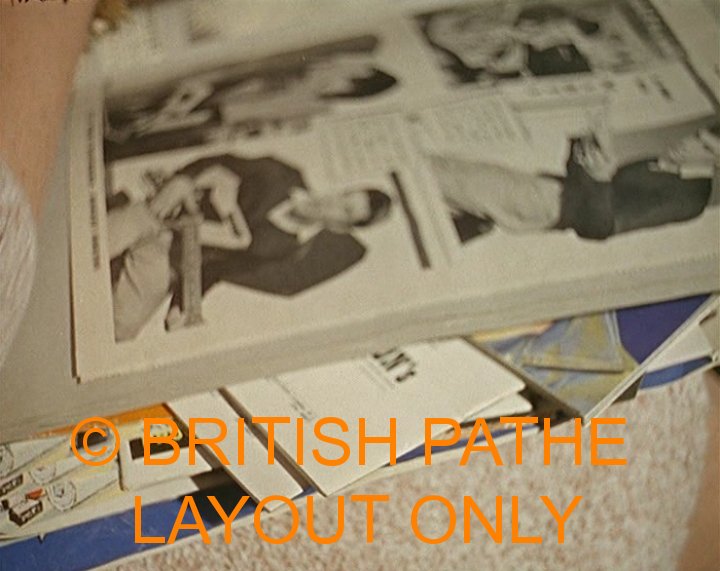 Marty pictured with it in a in a contemporary magazine, published 29th April 1959 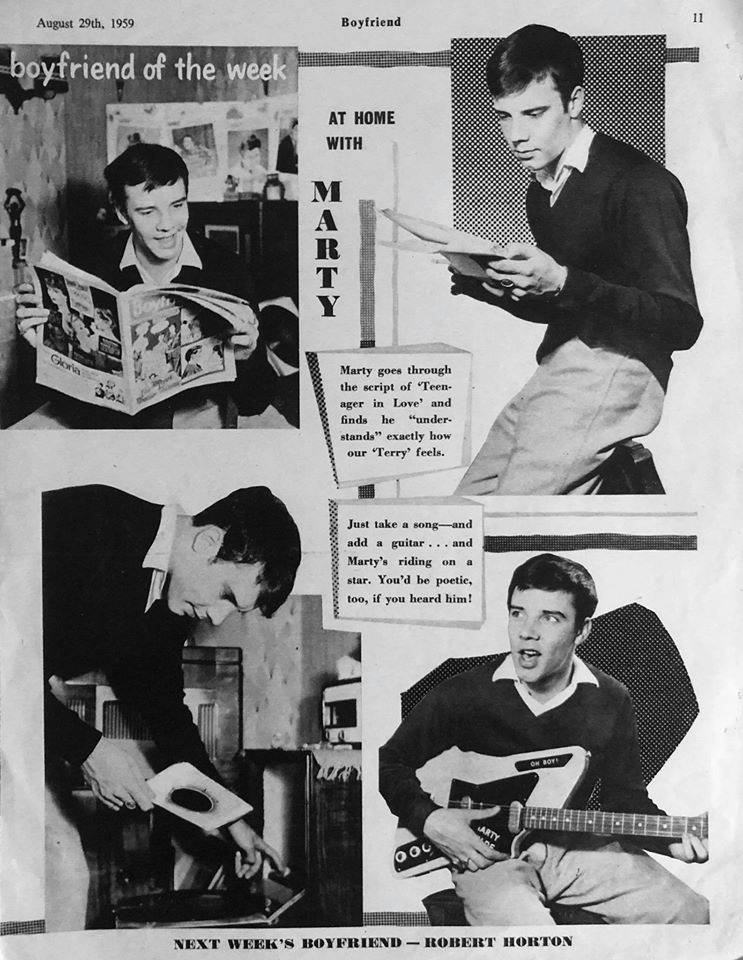 The full-length mirror and coat hooks behind Jet in the above picture do circumstantially imply that this is a performers' backstage area in a grand, wall-panelled older venue. Both Marty Wilde and Cliff and his band (including Jet) were the weekly resident guests on the Oh Boy! TV show's 8 month run ending May 1959, so it's worth considering that these may be prototype companion pieces, presented by the fledgling Burns-Weill company to the show's 'top stars' backstage at Hackney Empire circa February-March 1959 for promotional/artist feedback reasons. Burns-Weill was first active from January 1959, and first advertised May 1959, the same month the 'Oh Boy!' TV show climaxed, so these instruments must pre-date May 1959. 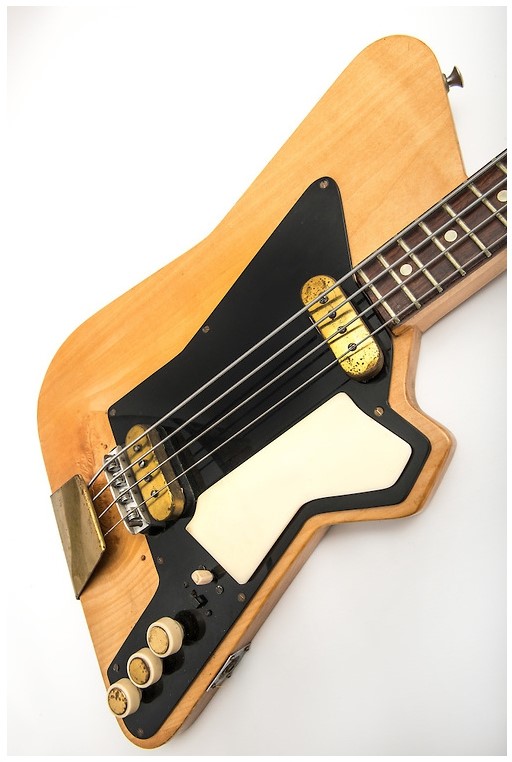 Text aligned left on nameplate. Only 20 frets. No triple-dot at 12th fret 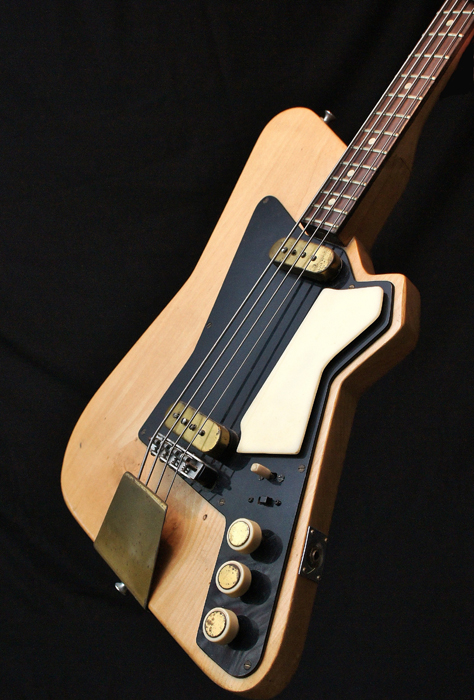 This example is now owned by Joe Cook of latimerhouse.com 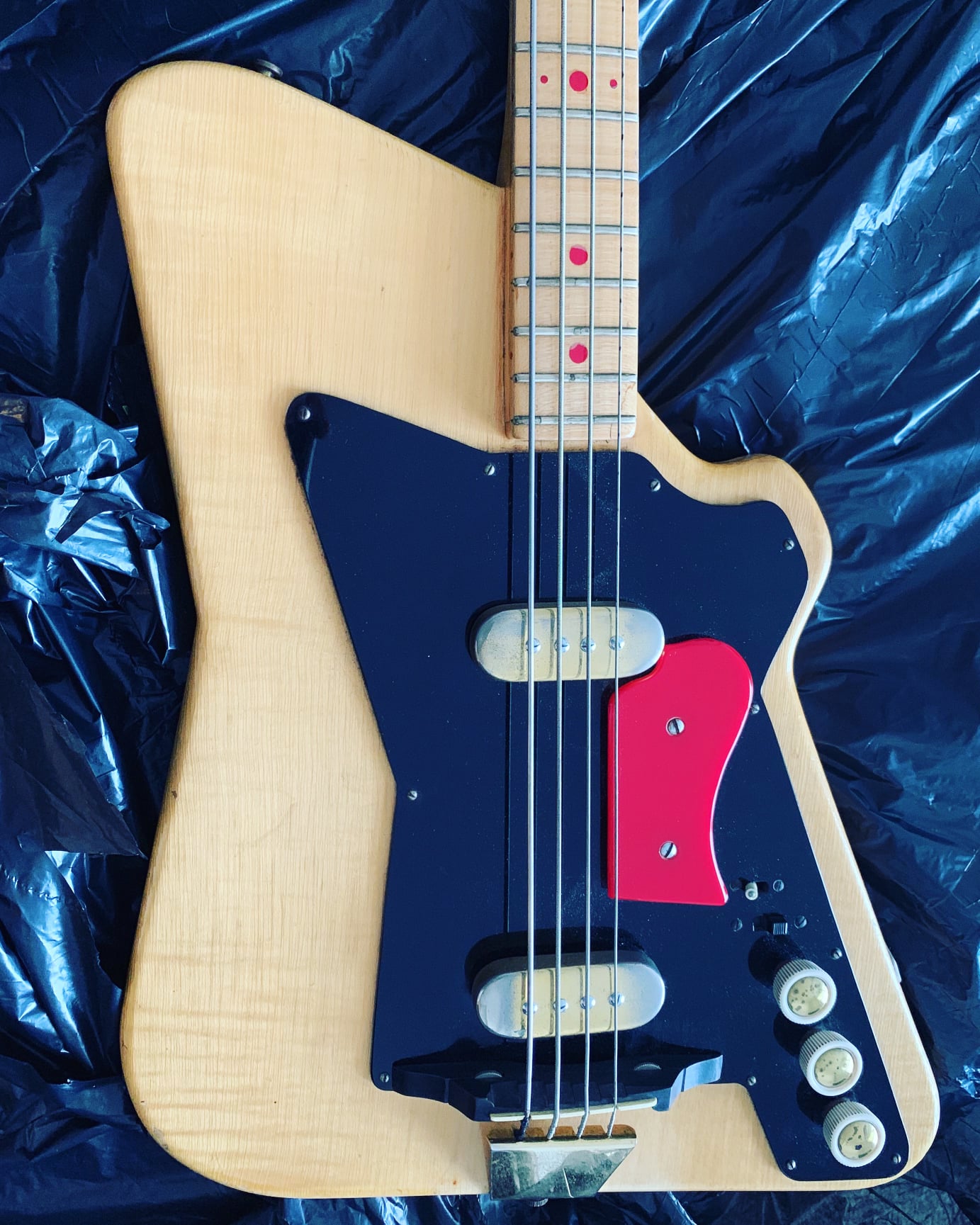 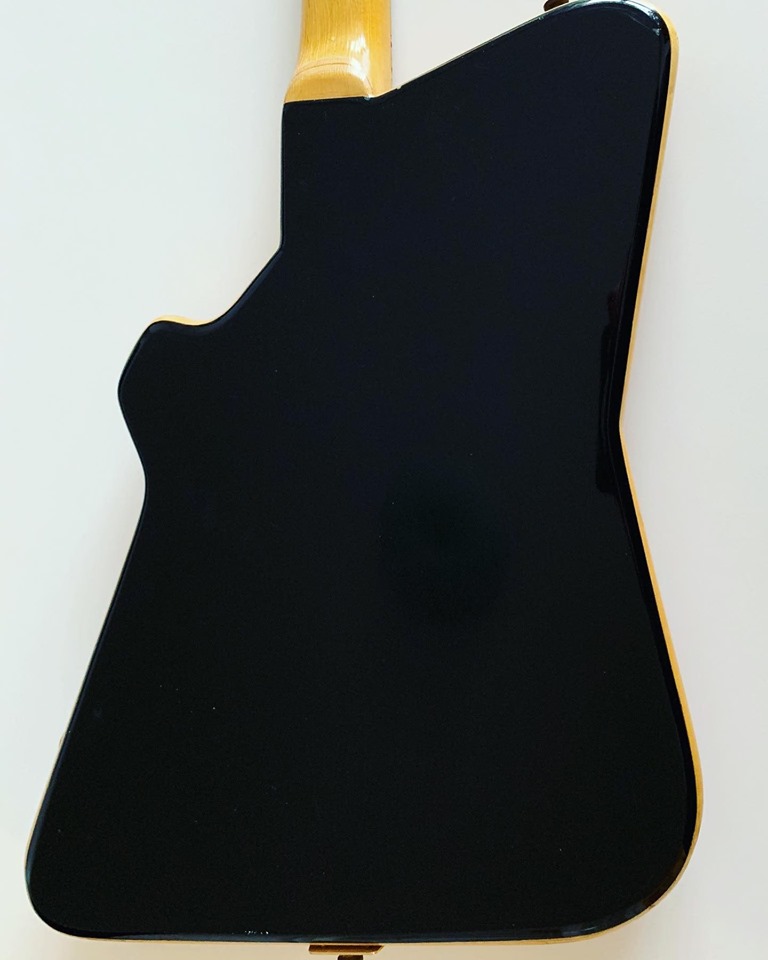 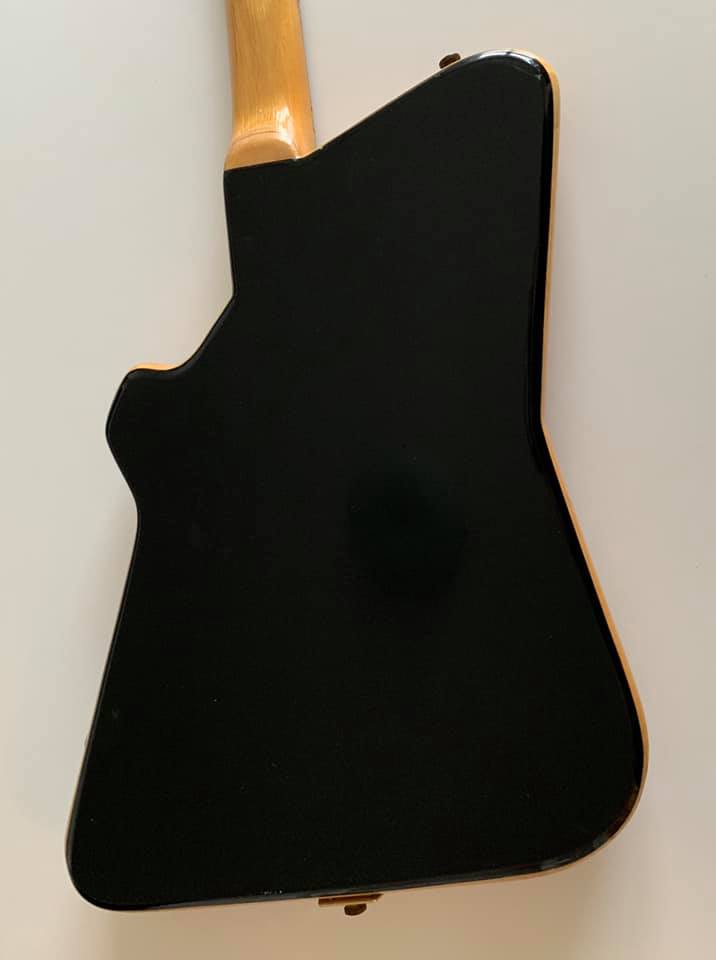 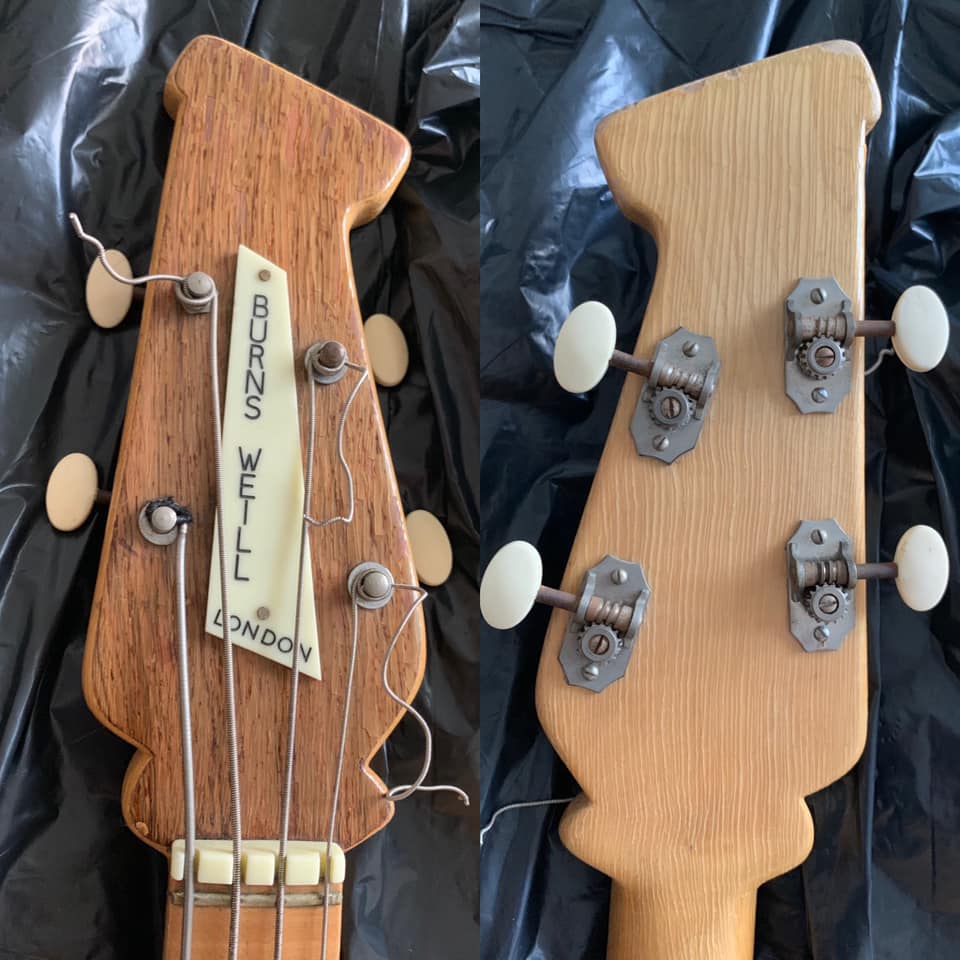 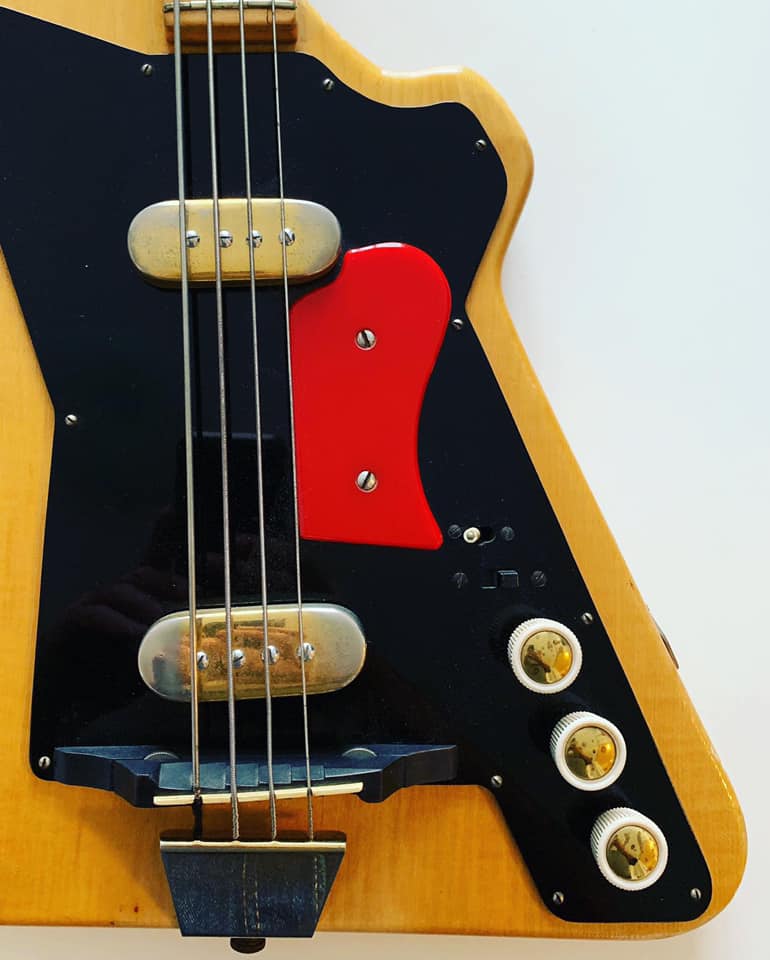 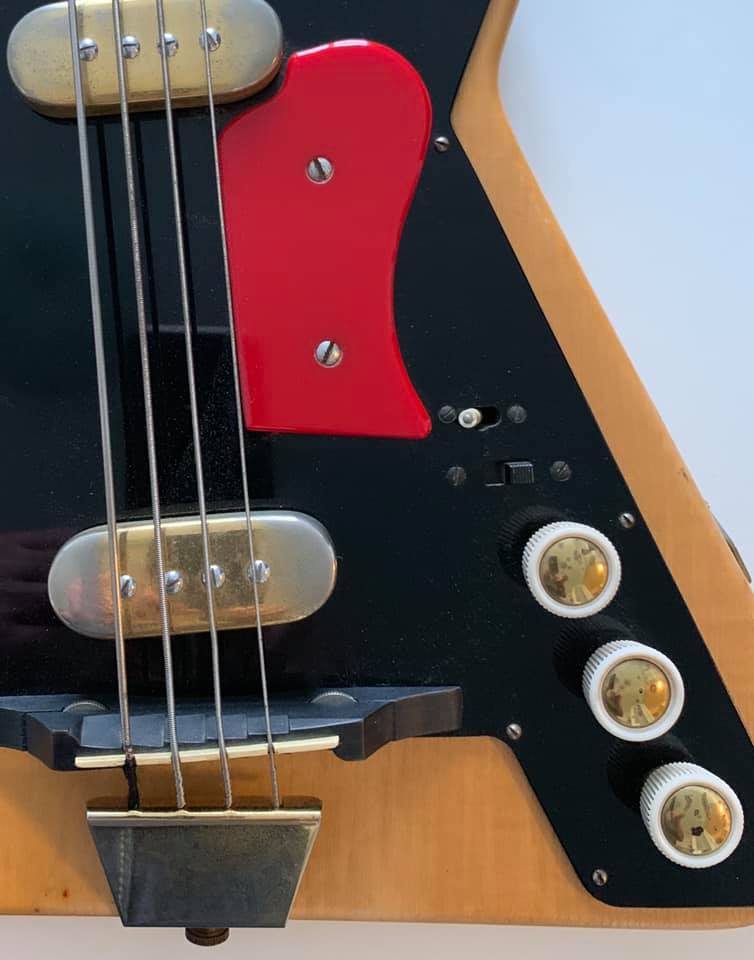 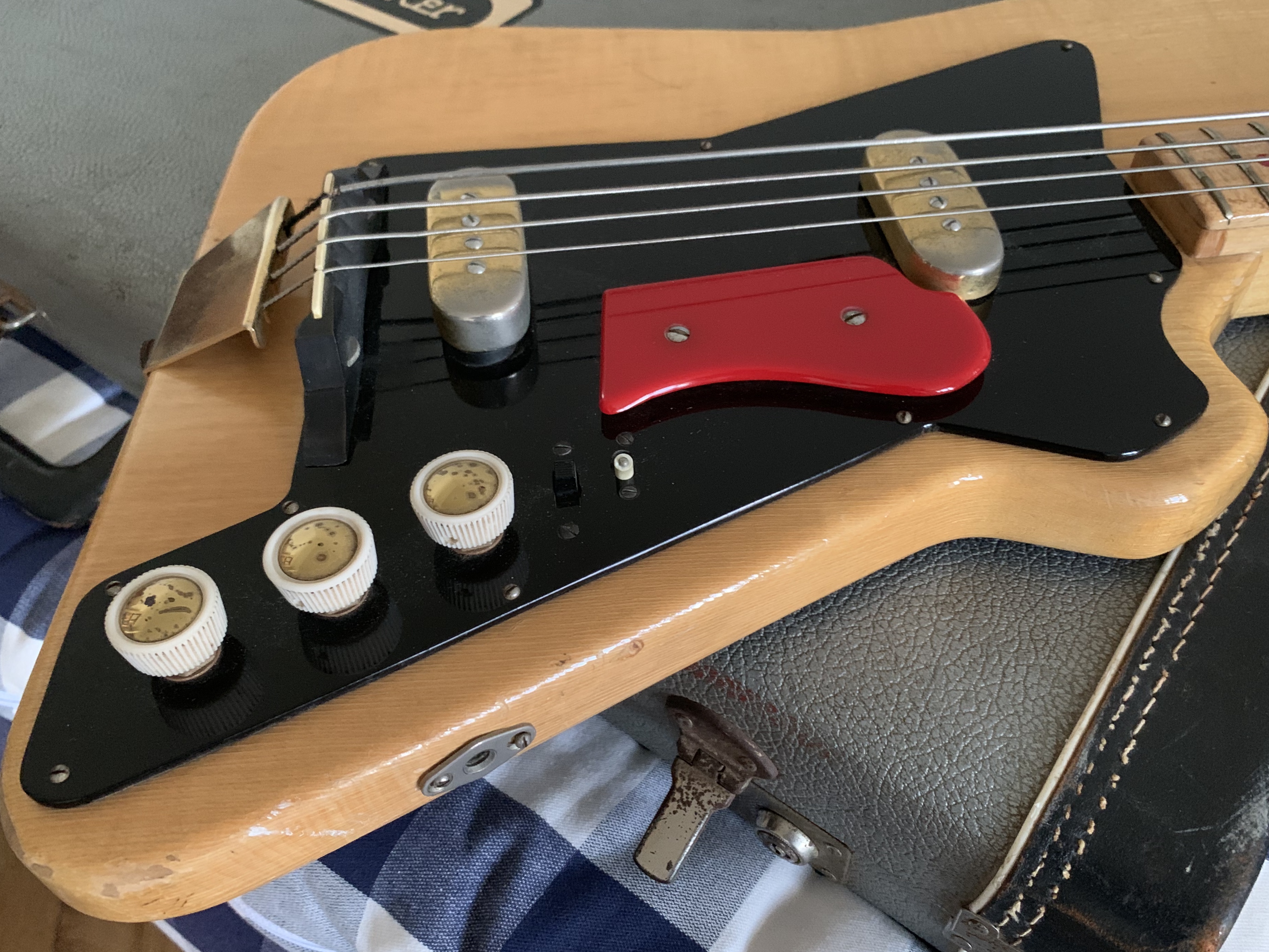 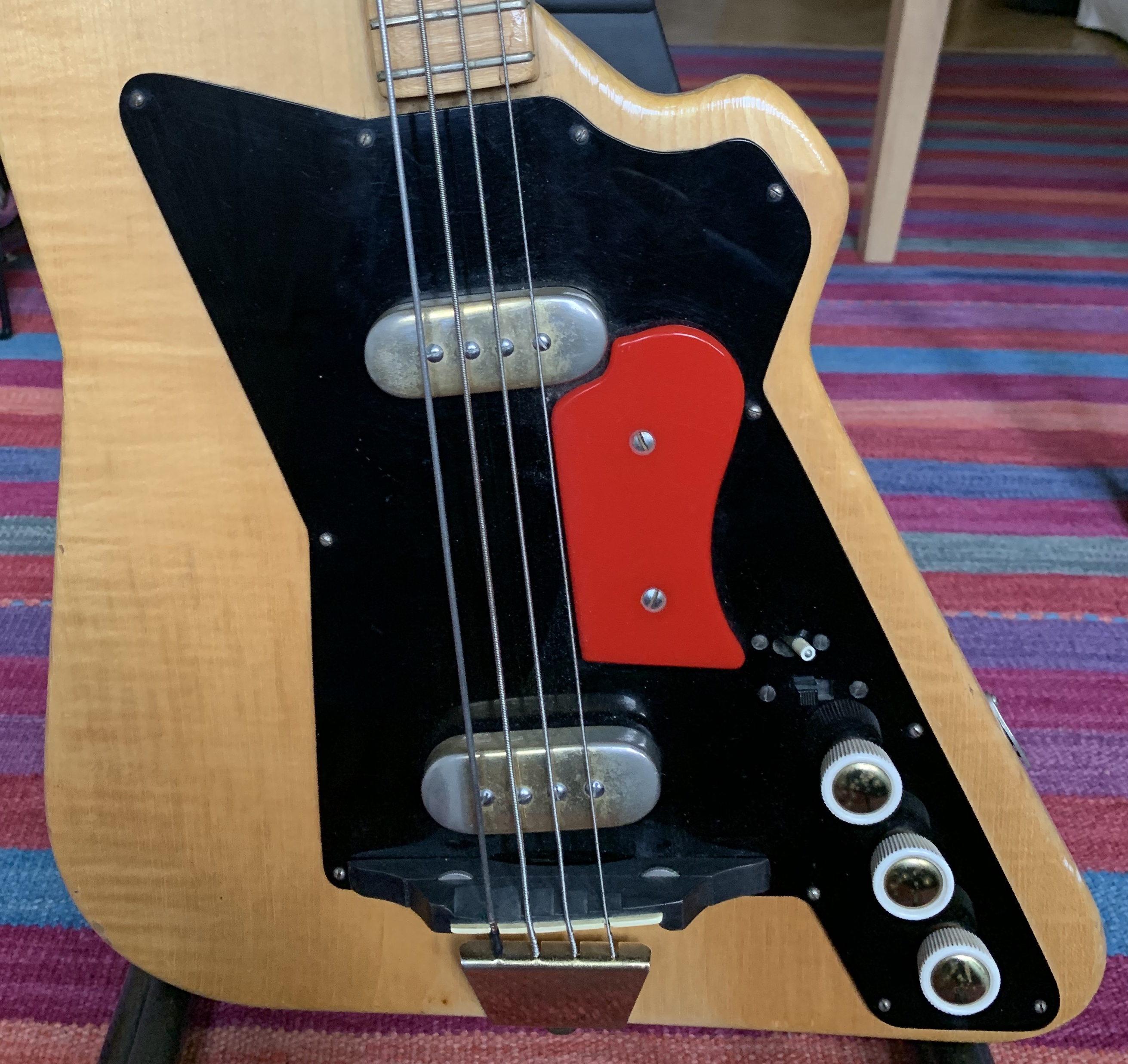 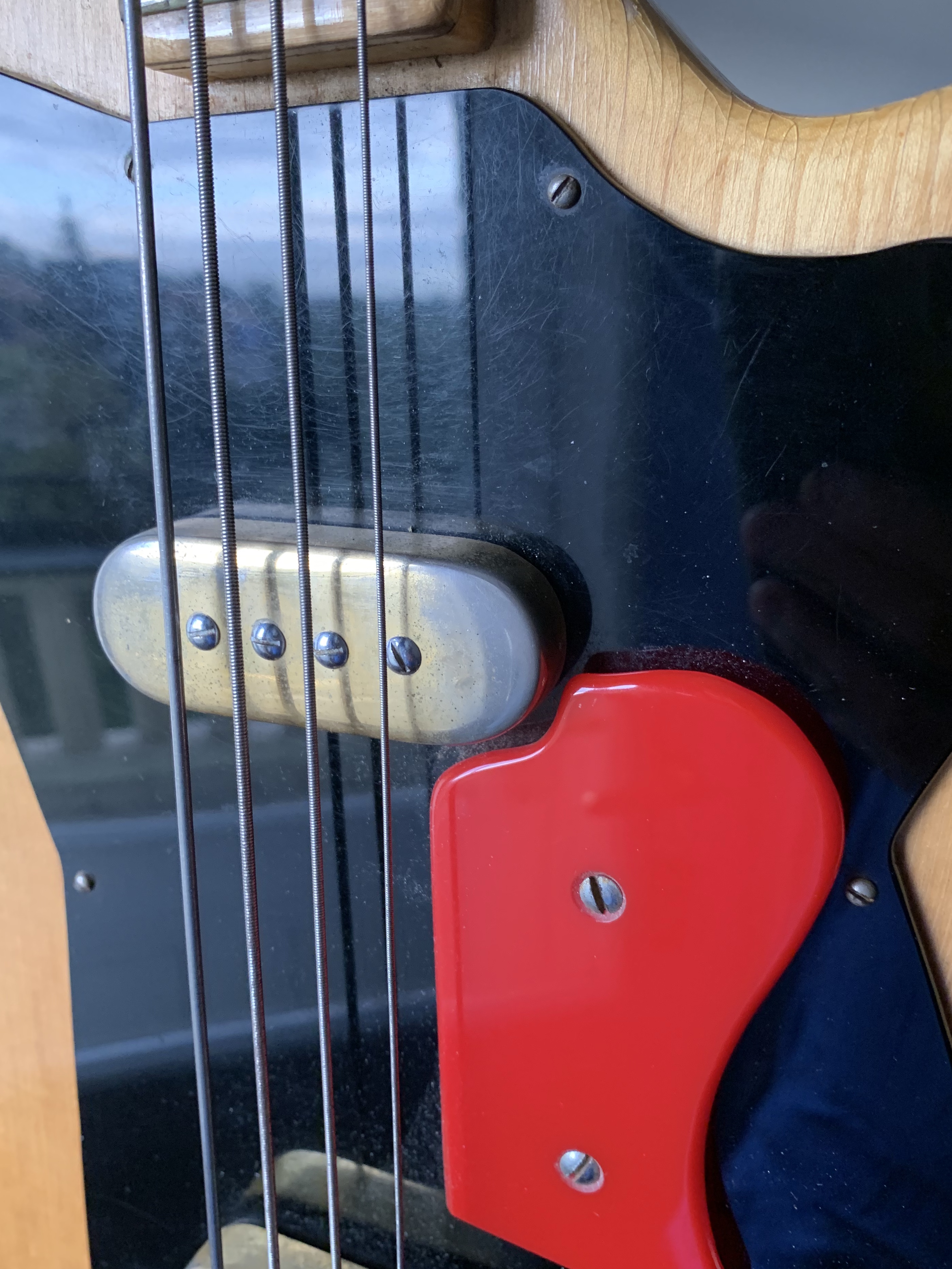 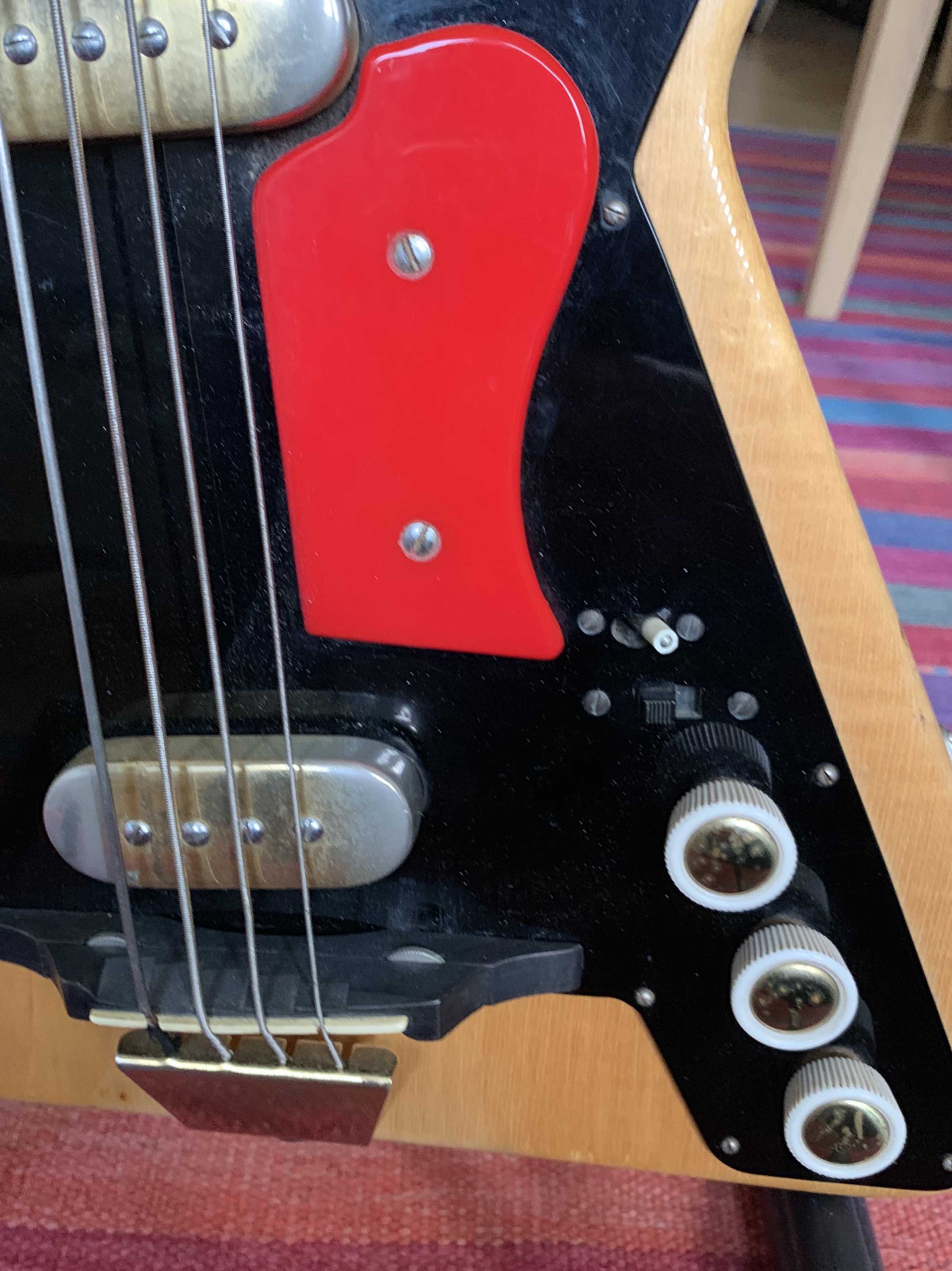 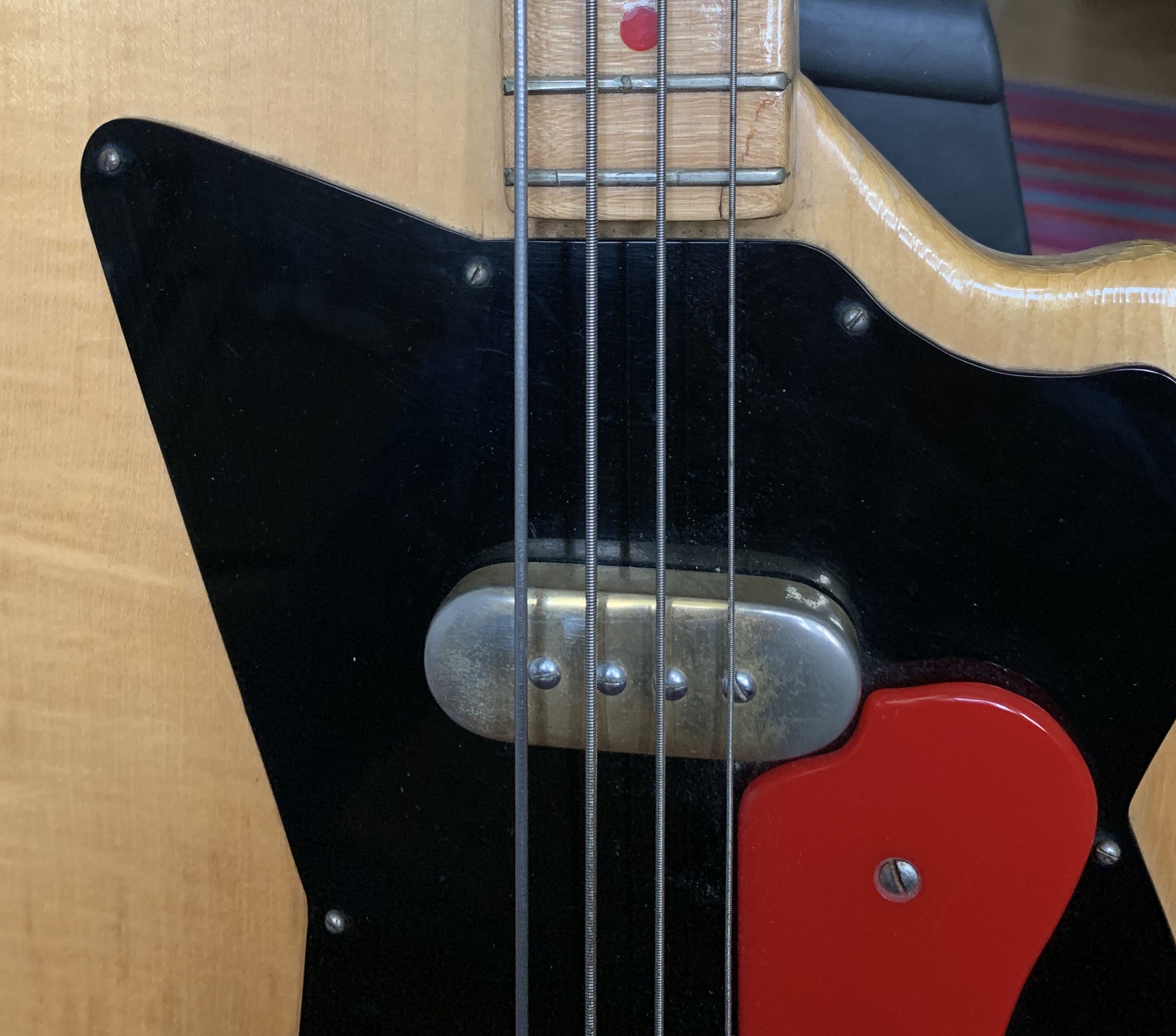 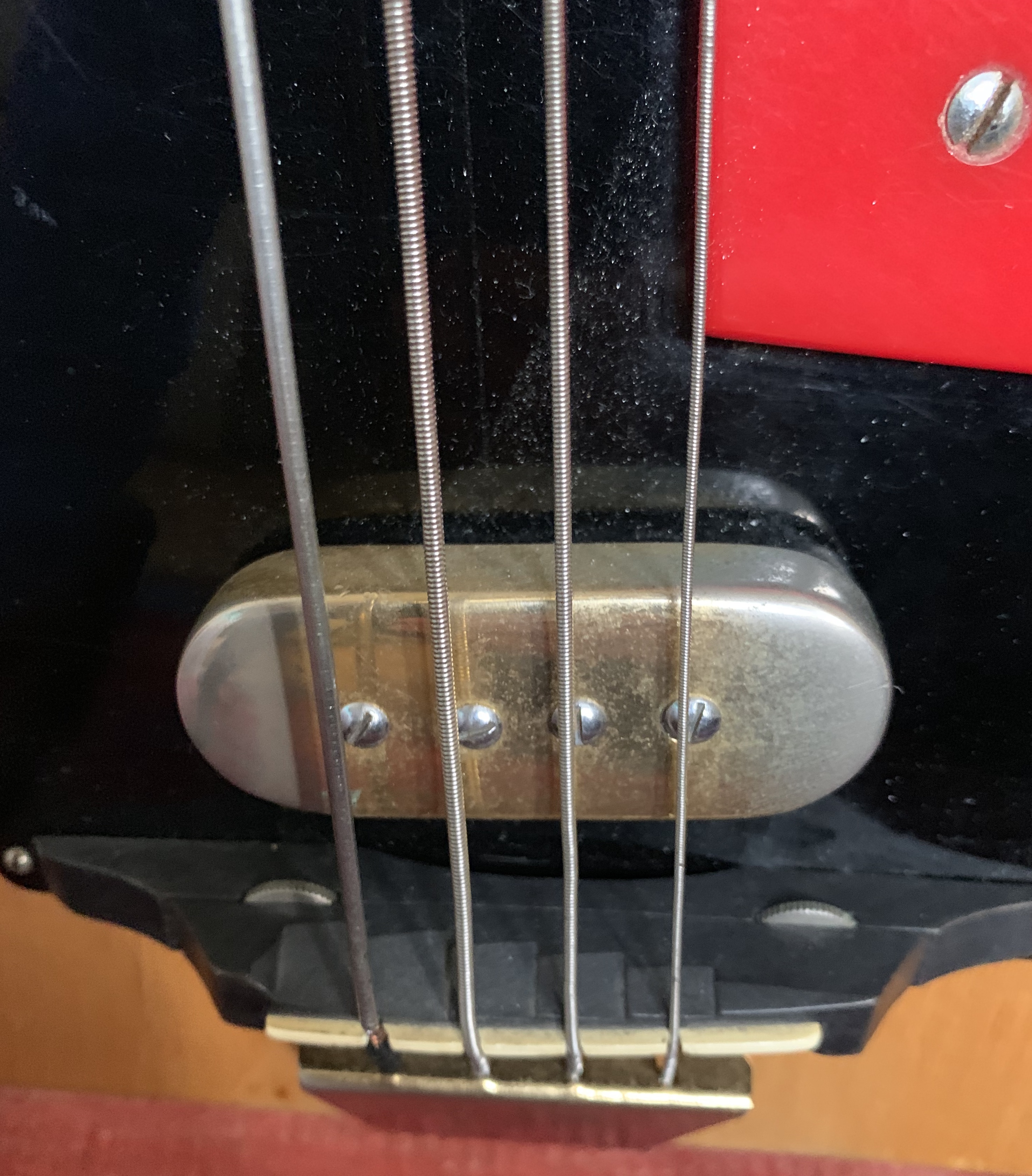 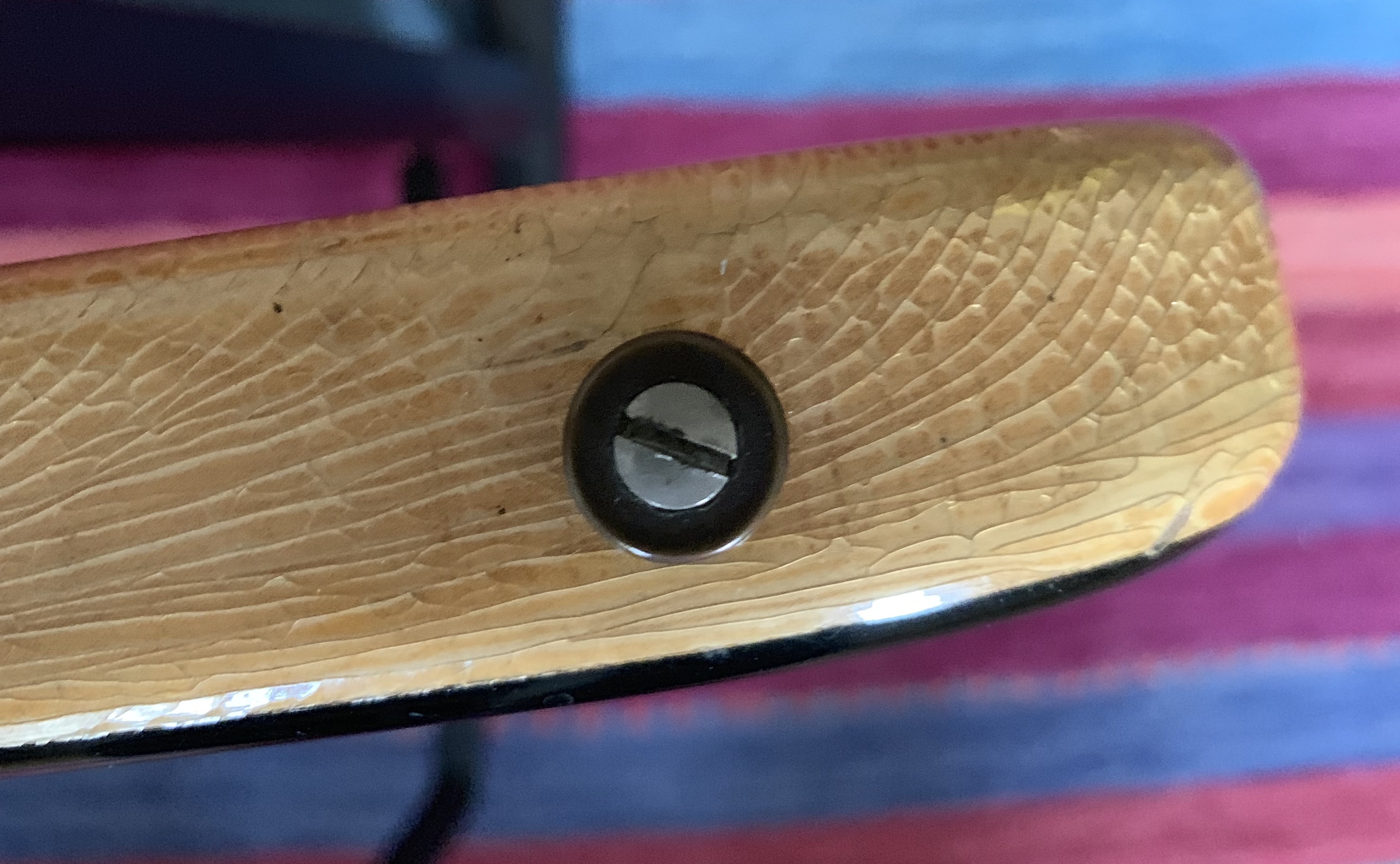 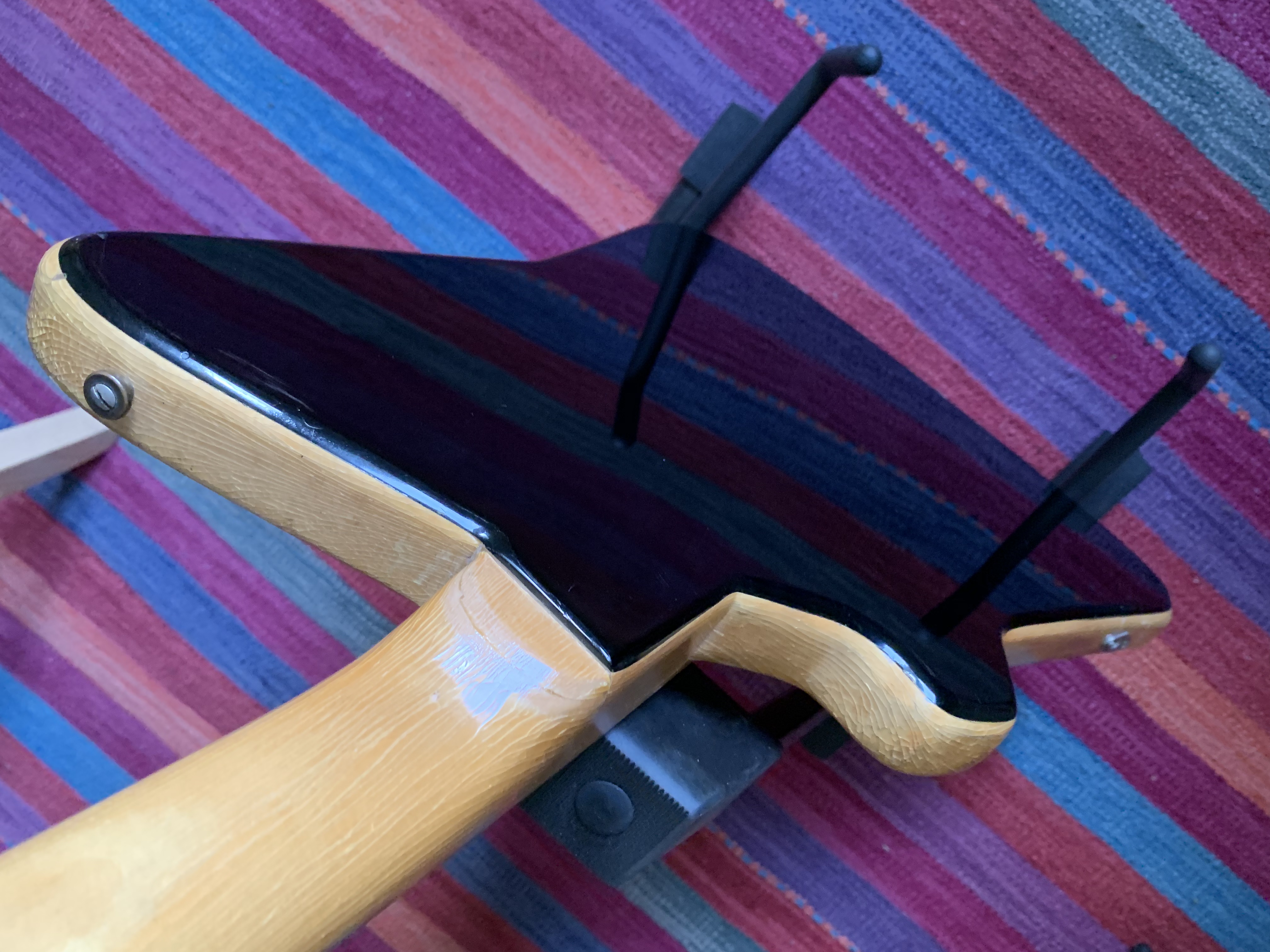